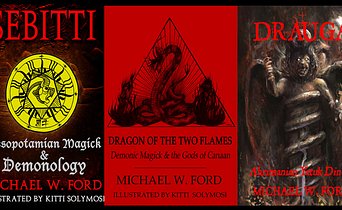 Michael W. Ford has published 26 books which explore numerous traditions of Luciferianism including both Philosophy and Magick.  Akhtya (Michael) is a Magus of The Order of Phosphorus and the Black Order of the Dragon. In 2014 Mr. Ford has served as an Archon and Co-President of the Greater Church of Lucifer (ALB). As a recording artist, Akhtya has recorded numerous albums since 1993 as a member of several Black Metal, Industrial, Dark Ambient and Ritualistic styles. Some of his projects include Black Funeral, Varcolaci, Strigoii, Cult of Thaumiel, Valefor, Darkness Enshroud, Akhtya, Nihtgenga, and formerly Hexentanz and Psychonaut 75.

Ritualistic Dark Ambient and musical compositions to inspire meditation, ceremonial ritual magick, exploring the unconscious and dream-haunting state of the in-between and sonic gates to Empyrean and Infernal Worlds as presented in Michael W. Ford's grimoires and publications. Listen and download Akhtya at bandcamp.

Luciferian Philosophy, Magick, Historical and mythological grimoires which are spirit-guides towards the disciplined journey into the Left Hand Path and initiation via Liberation, Illumination & Apotheosis. Michael's books are extensive in research, etymology, ancient practices and modern Luciferian interpretation to re-establish the Dark Gods and ancient powers inherent within nature and humanity.